I was looking forward to spending a lovely, 40 degree spring day in the woods and shaking a bit of winter frost from my bones. However, I faced one major obstacle: I had left my keys in a friend's car the night before. Typical. Luckily, my friend Josh is a good one -- he not only brought my keys to me, he also stuck around to join me on a hike.

THE MIDDLE OF NOWHERE

I wasn't surprised that no other cars were parked at the Azure Mountain trailhead when we pulled in around 10:30 a.m. Azure is a relatively small mountain -- roughly 2,500 feet in elevation -- and located in a remote section of the Adirondacks, so it doesn't always see a lot of traffic. However, it's only about a 30 minute drive from Saranac Lake and it is, in my opinion, quite underrated.

We geared up while my dog enjoyed the fresh air. The snow on the trail was fairly packed, but we wore snowshoes anyway, just in case we might need them later on. Although it was overcast and the sun was hidden behind a dense sheet of clouds, it felt incredible to wear just a light jacket and a baseball cap.

The trail to the summit is short, less than a mile, but it's steep, with an elevation gain of about 900 feet. We took our time meandering through the birches and beeches. A tree that appeared to have been shredded by a black bear caught our attention early on. We stopped to study the ground for tracks and other clues, but ended our investigation inconclusively. Ahead, a tree with peculiar curvature awaited our admiration, and about halfway up, climbable boulders with cavelike crevices lured us to take a closer look.

The trees were bare, minus a few orange leaves that clung to the beech branches, which allowed some gorgeous views of the boreal forest below. When the fire tower on top of Azure became visible, it was a signal to stop and add some layers. The trail leads right to the tower, and to the left of that there is a man-made stairway down to a large exposed rock with a view to the south. Despite the clouds, we could clearly see the St. Regis River and several snow covered peaks in the distance. We even spotted Whiteface Mountain, where we had been snowboarding the day before. There is another trail off to the right of the fire tower, along the summit area, to a rock known as "balanced rock," but we were unable to explore that part of the summit due to strong winds.

The wind whipped across the exposed areas of the summit and grew even more intense as we climbed up the fire tower. Gusts funneled through the open windows and hissed against the metal structure. It was a fight to remain vertical. We spent some time huddled on the floor beneath the windows to escape the chilly blasts.

The Azure Mountain fire tower was originally built in 1918 and was restored in 2002. It is part of the ADK Fire Tower Challenge, which is a hiking challenge consisting of twenty five mountains with fire towers throughout the Adirondack Mountains. This fire tower contains a nifty round table map, with Azure mountain as the center point. In-between floor huddle sessions, we used the map to help us identify landmarks in every direction.

Eventually, we gripped our way earthward off the tower and continued down the mountain. Once we were back in the shelter of the forest a quiet, calm energy reclaimed the space around us. Patches of grass poked through the snow along the edges of the trail and tiny buds covered branches like a pleasant epidemic. Even the air smelled different. It wasn't the usual crisp scent of winter; instead, it was moist and fresh. The scent made me giddy thinking about the warmer months settling in.

From behind me, I heard Josh say, "this is really nice," and it was clear that he too had been infected by the allure of spring.

Getting there from Malone

The Azure Mountain trailhead is located on Blue Mountain Road.

Take Route 30 south from Malone toward Paul Smiths, then turn right onto Keeses Mill Road. Travel on that road for about 6 miles until it becomes Blue Mountain Road, which is a little rough. Follow that for about 9 miles; the trailhead for Azure will be on the left.

Take Route 30 from Malone toward Paul Smiths, then turn right onto Santa Clara Road/Route 486, toward St. Regis Falls, and continue for about 13 miles. Turn left onto Blue Mountain Road and follow it for 7 miles. The trailhead will be on the right.

Your Family Reunion in the Adirondacks 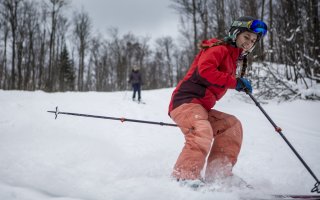 Take on Titus!
Why wouldn't you tackle Titus this winter?? 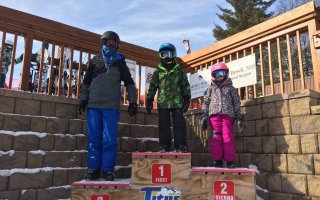 Why we love Titus
With 50 trails spread across three mountains, there is a lot to love abo 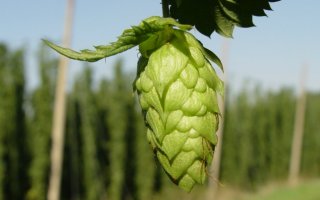